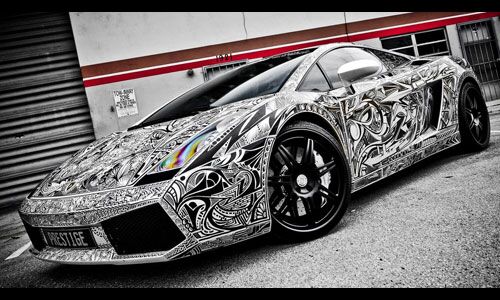 It takes a lot of courage to release the familiar, to embrace the new, to realize there is refuge in the adventurous and exciting. For in movement there is life and in change there is power. For Brett David, after the unfortunate passing of his father Irv David in January 2007, and his immediate transformation from heir to dealer principal of an automobile empire, he became fueled by an overwhelming desire to make a statement in the automotive industry.

Placed at the mercy of the non believers and a handful of skeptics, the 19 year old CEO and newly appointed owner embraced the reigns encompassing his automotive realm, and began to seek refuge in the unique situation he was given. Honoring his father and showing his employees that even through adversity and hardships the dealer would survive Brett David began to craft the idea of an extreme Lamborghini. A vehicle so distinctive that would reflect youth, ingenuity, and hope for the future.

Brett contracted local Miami graffiti artist Jona Cerwinske who has completed works for artists such as Lenny Kravitz and Swiss Beatz, to create something intriguing, turning a classic vehicle into something iconic. Brett began arming Cerwinske with memories of his father, the dealership, and his aspirations for the future inspiring him to generate a mobile masterpiece drawn completely free hand with no preconceived idea of what the car would transform into using a sharpie marker.

After two weeks of Cerwinske camping out in the Prestige Imports showroom, the result was an awe-inspiring piece of mobile performance art combining raw inspiration and artistic genius with an incredible estimated $240,000 canvas that only the truly courageous would dare attempt. The Sharpie Lamborghini represents onward movement and the drive to move forward into the future, a message clearly reflected by the strategically placed drawn arrows all pointing forward in the design.

Since the Sharpie Lamborghini?s debut in 2007, Brett David & his Lamborghini Miami dealership have continuously gained national and international attention. The Sharpie Lamborghini has graced the covers of magazines, been featured on every media outlet including hundreds of postings on the internet, and has appeared at several events. Through everything the vehicle has never lost its appeal, gaining new fans everyday of its existence.

The Sharpie Lamborghini proves that with courage to release the familiar and embracement of a new situation even out of adversity, what is adventurous and exciting is worth the risk. One act of courage can create a catalyst for great things to occur, for in movement there is life, and in change there is power.